Young LOCAL AUTHORITY OF THE YEAR 2017 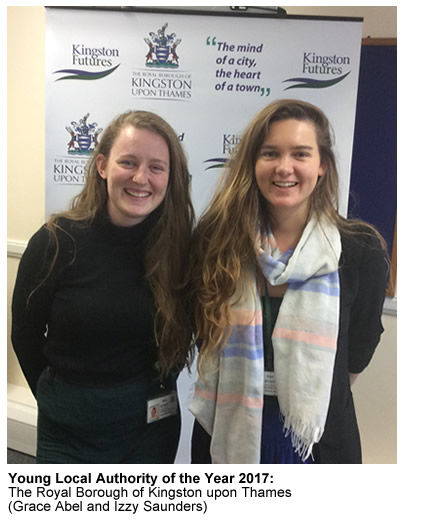 The Royal Borough of Kingston upon Thames, making their first appearance in the competition, won the title Young Local Authority of the Year at the annual event in Lancaster. The team – Grace Abel and Izzy Saunders – were praised for a paper on the disturbing impact of social media on young people. 'At once tender and angry, occasionally bordering on the lyrical, this quirky, well-crafted piece offered an ironical contrast to the dismal world which it revealed to us', said the adjudicators. Grace and Izzy were commended for their clear, confident speaking and 'brilliant' engagement with the audience.

Wigan Council, represented by Alex Ashall and Ryan Cunney, were runners-up for a 'credible, well-argued, lucid defence' of the much-criticised plan for a high-speed rail link connecting some of England's largest cities. The adjudicators said their total command of the script enhanced an 'exceptionally warm presentation'.

Highly commended in third place were Cheshire West and Chester Council and Warrington Borough Council. Robert Phimister and Helen Wray delivered a 'stylish, erudite' paper about the fashionable mistrust of experts. The adjudicators noted the excellent use of sources and apposite quotes, touches of sour wit, and confident phrase-making.

Two local authorities were highly commended: Hampshire County Council (Jessica Brown and Shona Rhodes) for a 'brave, challenging' paper on the Syrian refugee crisis and the London Borough of Southwark (Jas Dhell and Sheila Luwero) for an 'inspirational' paper on gender inequality in the workplace.